Tires Aren’t Just For Cars and Trucks, Especially in Flagstaff 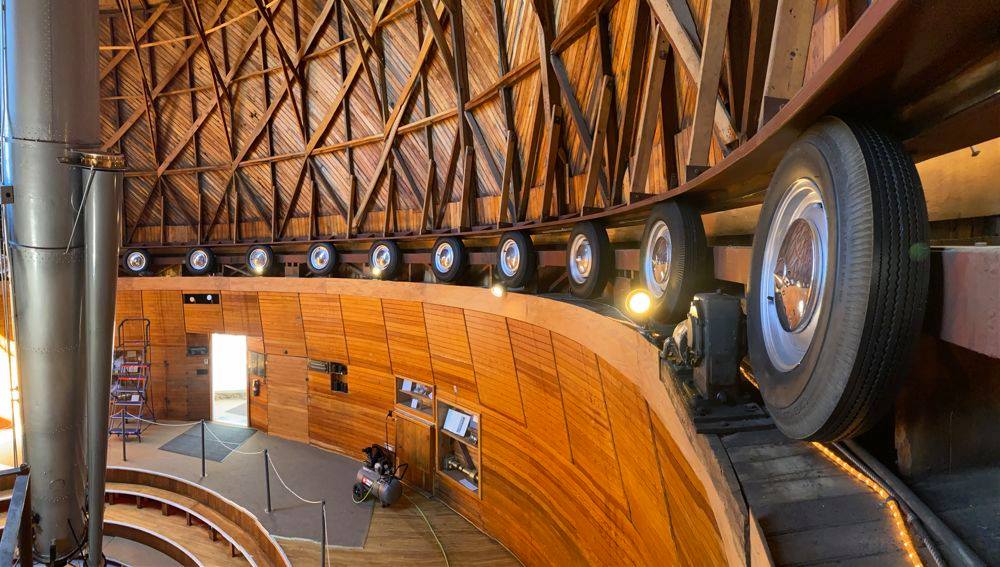 FLAGSTAFF, AZ — Nate Werner knew it would be a day unlike any other at Southern Tire Mart.  Most days were spent changing tires on shuttle buses headed to the Grand Canyon, servicing  18-wheelers on their way to Phoenix or performing maintenance checks on a number of trucks,  cars and SUVs for the residents and visitors of Flagstaff. But the office administrator understood how special the project was.

The renowned Lowell Observatory needed a few tires. In fact, they needed 21 tires for the Clark  Telescope, which had recently undergone a complete restoration. Thanks to the generous and loyal patrons of the Lowell Observatory, every nut, bolt, nail and plank of wood had been replaced on the Clark Telescope, which is one of seven structures at the Observatory with a  Registered National Historic Landmark designation and was even used by Apollo astronauts for their training for the lunar landings.

Today, the Clark Telescope is used primarily for educational purposes, allowing school children and people of all ages to see objects in space that one can’t see with the naked eye.

The tires are a critical component of the telescope in that they rotate the roof, or the dome,  which allows guests to enjoy the full view of the night sky.

The tires that would be replaced by the Southern Tire Mart team were quite aged and worn,  having “traveled” to the moon a few times. The first rubber tires were installed on the telescope in 1960 and most had been replaced since then.

Southern Tire Mart and Lowell Observatory staff worked together to carefully remove each tire from the historic telescope and prep it for the new tires. In a process that took less than 4  hours, Andre Begay, a tire tech at Southern Tire Mart, skillfully installed 21 new special tires by

“We were honored to work with Lowell Observatory on this very special project. They are such an important part of this community and contribute so much to education and science,” said  Southern Tire Mart manager Christian Martinez.

Southern Tire Mart has over 130 commercial and retail locations located throughout the United  States and is the number one commercial tire dealer in North America. Partnering with  Bridgestone, Firestone, Michelin, BF Goodrich, Continental, General Tire, Toyo, Yokohama and many other quality tire manufacturers, Southern Tire Mart also offers specialty tires and services for OTR tires for agricultural and industrial vehicles, aviation ground support systems, and yes, magnificent telescopes that have allowed many celestial enthusiasts to see the universe.

“Flagstaff is lucky to be home to the observatory that is credited with the discovery of Pluto,”  added Martinez. “And we’re so proud to be their tire guys.”

Founded in 1894 as an astronomical research facility, Lowell Observatory has been home to many significant discoveries, exhibits, tours, and multi-media shows. Each year, over 100,000  visitors enjoy seeing the stars, planets, moons, and more through the powerful telescopes of  Lowell Observatory.

“Lowell has been a part of Flagstaff and northern Arizona for 127 years, and we greatly enjoy working with the community and with local suppliers on fun and unusual projects like this one,”  said Lowell Observatory director Dr. Jeff Hall.